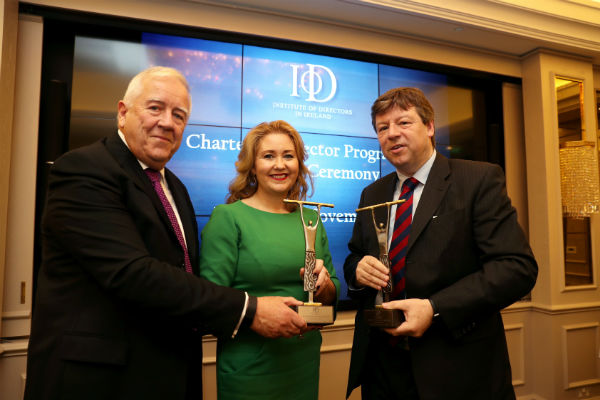 Raising the bar: Pictured at the Institute of Directors’ Chartered Director Programme Awards in Dublin this morning is (R-L) Liam Young, CEO of Errigal Bay and former non-executive director of NYSE listed technology company, Fleetmatics plc, who won the Chartered Director Award 2017 with Karen Hennessy, Chief Executive of the Design & Crafts Council of Ireland, who was named as the Graduate of Merit 2017. Both were recognised for their contribution to driving board effectiveness and business performance across their organisations.

The IoD Chartered Director Programme Awards are held every two years and recognise the achievements of Chartered Directors and graduates of the Programme in contributing to organisational direction and driving both board effectiveness and business performance.

“In Liam Young and Karen Hennessy we have two very worthy winners who positively contribute to business performance and to improving governance standards in Ireland.

“Liam Young is an accomplished director and business advisor, with extensive experience in both private and publicly listed companies. He has founded and led companies and has played a pivotal role in creating value for shareholders. Liam is focused and driven and a fine ambassador for the Chartered Director qualification.

“Karen Hennessy has shown her commitment to organisational direction through her role in leading Irish Design 2015, adding value and visibility on an international scale to the Irish design sector. Both are most deserving recipients of the Chartered Director Programme Awards and on behalf of the Institute of Directors in Ireland, I offer my warmest congratulations.” 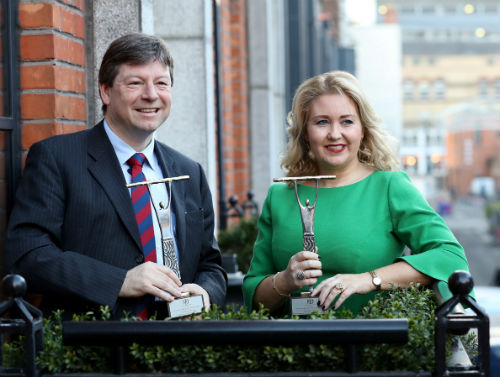 Liam Young achieved Chartered Director accreditation in 2011 and is a highly experienced director having served a five year period from 2012 on the board of Fleetmatics plc, a leading provider of fleet management solutions, which was listed on the NYSE prior to its sale to Verizon Inc in 2016.

Liam is a director and chief executive of Errigal Bay Ltd, a leading seafood company with plants in Wexford and Donegal, employing over 200 people in Ireland and exporting premium shellfish products internationally.

Karen Hennessy completed the IoD’s Chartered Director Programme in and is the Chief Executive of the Design & Crafts Council of Ireland. Since her appointment in 2011, she has been at the forefront of developing and strategically positioning Ireland’s dynamic design and craft sector as a key component of the Irish economy. Karen led Irish Design 2015, the year-long Government supported initiative promoting Irish design around the world.

She is chairman of Showcase Ireland Events Ltd and a director of Kilkenny and Carlow Education and Training Board. Karen is a member of the National Design Forum and also sits on the Industry Advisory Committee of UCD’s Cantillon Centre for Entrepreneurship. Karen is a qualified Chartered Accountant and holds an MBA from UCD Smurfit School.

Read coverage of the Chartered Director Awards in the Irish Independent and the Sunday Business Post.