Shipflation and the Need to Think Outside of the Box

Exclusive insights by Glenn Murphy MSc. FICS, Chairman of the Board, Institute of Chartered Shipbrokers, and MD, Irish Shipbrokers & Chartering Ltd. This blog has been written exclusively for IoD Ireland.

In 1759, the economist Adam Smith first theorised about the ‘the invisible hand’, which he used to describe the unseen forces that move the free market economy and where voluntary trades in a free market produce unintentional and widespread benefits. Fast forward over a quarter of a millennium and we have now a truly globalised economy where countries have increasing interdependence to trade as a result of the growing scale of cross border trade of commodities and services.

Over the last 50 years international shipping, and in particular containerised shipping, has played a central role in accelerating the movement of goods by significantly lowering the unit costs of trade. It could be argued that shipping has, in fact, been the real invisible hand that has been quietly moving the free market economy. As a result of the modern containership revolution, many businesses have evolved and built their supply chains to be very lean and agile.  This has allowed them to carry lower levels of inventory without the need to stockpile products tying up capital on its balance sheet.

The Impact of a Spike in Container Rates

Shipping costs usually represent only a small percentage of most commodity transactions. Container rates, in particular, have remained flat for almost a decade. However, the unprecedented spike in container rates during the pandemic is now seen as a significant factor in fuelling global inflation. The average cost of an export container (boxes) between Asia to Europe or North America has increased at least fourfold over this period of time. The United Nations has recently said that the surge in shipping costs resulting from the supply chain disruption is likely to inflate consumer prices by 1.5% in the coming 12 months. Shipflation has suddenly become a real issue with both businesses and governments starting to take notice. 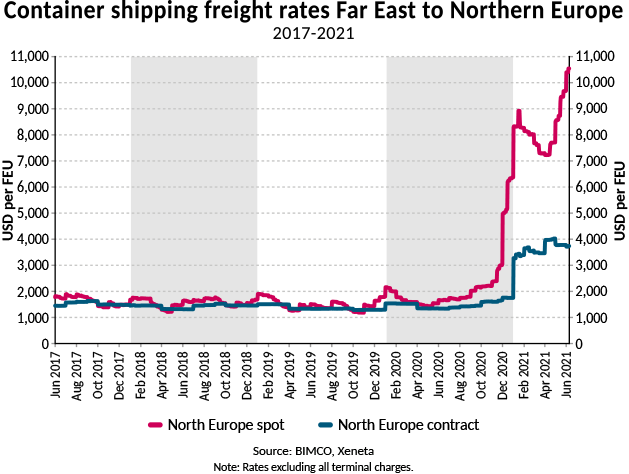 The Causal Factors that Led to the Spike

There are a number of causal factors that have contributed to the largely unwanted spike in freight rates and scarcity of capacity. The chain of events cascades back to the first quarter of 2020 when the real effects of the pandemic started to truly impact. Entire economies went into lockdown. Plants and factories closed, retail was reduced to essential services. Consumption patterns were abruptly adjusted. Against this background of evolving chaos, shipping lines were left with their ships trying to maintain their schedules with full operating costs but with vastly reduced payloads. Ships were badly delayed in ports from congestion due to lack of available labour to handle the cargo. Further COVID-19 related disruptions in the onshore transport supply chains exacerbated the problems. Bankruptcy looked a very real prospect for a lot of shipping companies.

Thankfully, by the end of September last year economies started to reopen. This resulted in a convergence of companies suddenly wanting to switch back on and ramp up production. Consequently, there was an inevitable surge in pent up demand for raw commodities, which resulted in prices inevitably soaring.

During the lockdown phase, huge volumes of containers had been displaced from their regular routes. Congestion at ports for ships, especially at the gateway ports in Asia, Europe and North America, continued to escalate. During this period very few new containers or containerships were built, older ships were scrapped and the supply/demand imbalance widened.

On the 23rd of March 2021, to compound the problems of already highly stretched supply chains, the MV Ever Given grounded and blocked the Suez Canal, a major trade artery for Europe-Asia traffic. This immediately created a further realisation that more ships would be needed as the log jam of vessels continued to build up. Charter rates surged for large container ships, going from $15,000 per day to over $200,000 per day for short-term charters.

How the Industry Reacted

There was also no guarantee that even if a business was willing and able to pay the higher freight rates that it could secure sufficient capacity. It didn’t seem to matter if you were a small furniture importer booking one container a month or large conglomerate like IKEA booking thousands of containers every week. As a result, large and small companies were forced to think outside the traditional ‘box’ to find substitutes to keep their supply chains open. Companies like Amazon, IKEA and Coca Cola bought or chartered in their own dedicated vessels. Coca Cola, a huge consumer of container shipping, instead chartered large break bulk vessels to carry their cola concentrate to ensure that they had continuity of supply for their global production plants.

In the case of my shipbroking firm, we have also seen a sharp increase in companies seeking alternatives to get to market. We have subsequently acted for companies who hadn’t chartered a vessel for over 20 years and in some cases had never chartered a vessel before. These companies had to innovate and adapt their procurement or sales processes away from their traditional methods. A failure to do this would have resulted in their production facilities being unable to function or worse still risk going out of business. Some of these companies have actually managed to find unexpected benefits from switching modes with shorter transit times, lower freight rates and greater control over their supply chain from point to point.

I have no doubt that this present shipping capacity crisis, like many other crises in shipping over the years, will pass. Supply chains will eventually return to normal and freight rates are likely to fall, although I doubt if they will return in the medium-term to the pre- pandemic levels previously enjoyed by businesses. Many lessons should have been learnt by companies. I expect many are likely to ensure they have a contingency ‘Plan B’ while also diversifying their shipping strategies and, perhaps, not putting all of their eggs in one ‘box’ in the future.