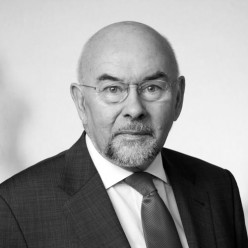 Ruairi Quinn Chairperson of the Institute of International and European Affairs

We are pleased to announce that Ruairi Quinn, Chairperson of the Institute of International and European Affairs, will address 'Roadmap to 2040 - What needs to happen?' at the final event in the Lunch Bites @ The IoD Series 2018.

Ireland won its independence from Great Britain in 1922/23. Following that, the population of the new State, as measured in the Census declined in every five year period up and including 1961. Since then there has been slow and steady growth in population numbers to the present day, where the population is about 4.7 million. By the year 2040, that figure will be at least 5.7 million. It may seem to be a long time away. It is 22 years, exactly.

Or, to put it another way, that time is as close to us now, as the year 1998, and every grown up person here knows just how far back that is. An extra ONE million home born Irish in just 22 years.

﻿The Lunch Bites @ The IoD Series is kindly sponsored by First Names Group.

This event takes place on Thursday, 8th November, at 12.45pm in the National Concert Hall, Dublin 2.

If there is a question you would like to ask in advance, please let us know by emailing Elizabeth O'Sullivan or feel free to raise your questions or comments on the day. Places will be allocated on a first come, first served basis.

CPD: IoD events may be eligible for CPD, including Chartered Director CPD. Please check with your relevant professional body.

Chairperson of the Institute of International and European Affairs

Ruairi Quinn was appointed Chairperson of the Institute of International and European Affairs, effective from January 2017. He was a public representative from 1974 until his retirement from Dail Eireann in 2016. He has broad political experience, having served as a Minister in six different Departments, including Minister for Finance (1994-1997) and Minister for Education and Skills (2011-2014). As Minister for Finance, he served as President of the Ecofin Council of the European Union in 1996, and worked to accelerate the launch of the European Single Currency. When leaving office in 1997 he handed over a surplus, the first in over 50 years, to qualify Ireland for the single currency.

In 1997, he was elected to lead the Labour Party. As Leader, he developed a strong policy platform, in which he promoted closer European integration. In 2002, he retired as Leader, after choosing not to seek re-election. He is currently the Vice-President and Treasurer of the Party of European Socialists and has also recently joined the Trinity Business School as an adjunct Professor. He is a former Chairperson of the European Movement Ireland and the Holocaust Educational Trust. His political memoir, Straight Left - A Journey in Politics, was published in 2005. Before entering public life, Ruairi Quinn was an architect and town planner.

First Names Group is a leading independent provider of corporate, trust, fund and real estate services with a network of strategically located offices across the globe.

Its presence in – and knowledge of – the regulatory landscape in so many of the world’s key financial jurisdictions means First Names Group can respond to the varied and specific needs of its clients, either directly or via their trusted advisers.

Recognising that one size does not fit all, First Names Group takes the time to understand its clients’ individual needs and is proud of the ability of their people to tailor the right solutions.  The Group is director-led, with a clear focus on professional qualifications among employees, with many accountants, lawyers, chartered secretaries and trust and estate practitioners providing the necessary experience.

In Ireland, the Group’s main focus is on providing corporate services for international clients restructuring their business/organisation or expanding into the Irish and European markets across a range of industry sectors – ICT, pharma, biomedical, manufacturing, aircraft leasing, food and beverage and financial services, among others.

To find out more visit www.firstnames.com