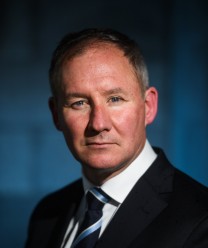 As a consequence of the continuing uncertainty surrounding the public health impact of COVID-19, the IoD Ireland Spring Lunch with Jim Gavin, Assistant Director, Irish Aviation Authority, and former Manager of the Dublin GAA Senior Football Team, has been cancelled.

The event was due to take place on Friday, 27th March at 12.30 in the InterContinental Hotel, Ballsbridge, Dublin 4.

We will be issuing refunds for all places booked which have been paid for and will be in contact in due course in relation to this. We would also like to ask members who have invited guests to this Lunch to communicate the cancellation to them.

IoD Ireland very much regrets any inconvenience caused to our members and wishes to apologise for the short notice.

﻿Jim Gavin is Assistant Director with the Irish Aviation Authority (IAA) and former Manager of the Dublin GAA Senior Football Team. Jim received the Freedom of the City of Dublin on 18 January 2020, and was conferred the award of Doctor of Philosophy (Honoris Causa) from Dublin City University in 2019.

As Head of the National Supervisory Authority with the IAA, Jim ensures the supervision of the regulatory framework for civil airspace and the associated air traffic management. He also has responsibility for the certification and oversight of air navigation service providers, and the preparation of national air traffic performance plans for the State. Jim also has responsibility for the oversight of civil aerodromes and civil aviation security standards within the State.

Jim is a former military pilot and commissioned officer, with 20 years of service in Óglaigh na hÉireann (the Irish Defence Forces), holding the senior rank of Commandant.

He is an ambassador for Bóthar and the Dublin Neurological Institute (DNI), and patron of Touch Ireland.

Duff & Phelps is the global advisor that protects, restores and maximises value for clients in the areas of valuation, corporate finance, investigations, disputes, cyber security, compliance and regulatory matters, real estate advisory and other governance-related issues.

We work with clients across diverse sectors, mitigating risk to assets, operations and people. With Kroll, a division of Duff & Phelps since 2018, our firm has nearly 3,500 professionals in 28 countries around the world.

To find out more visit the Duff & Phelps website.